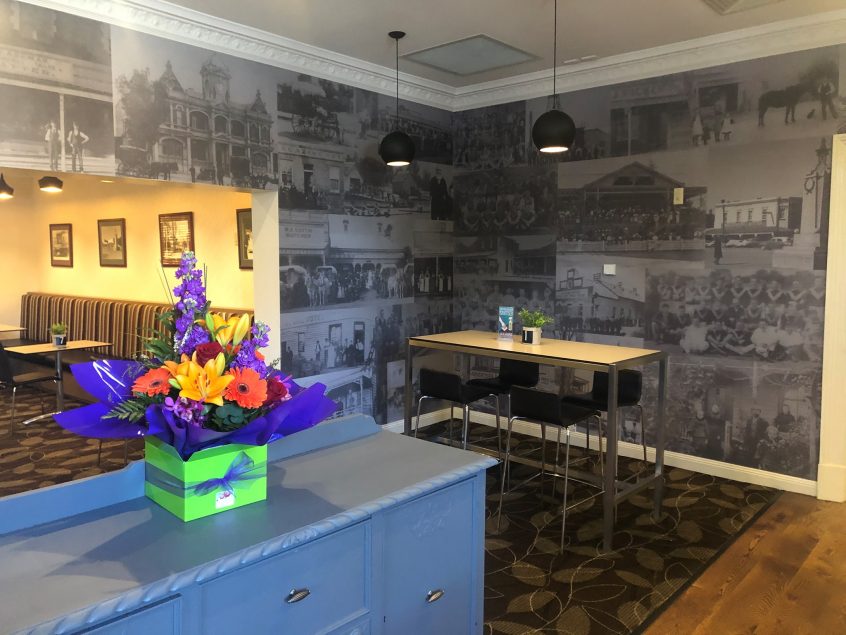 Historic walls come to life at the Borough Club

It’s hard to find a community that’s more passionate about its history than the people of Eaglehawk.

More than 150 years after the establishment of what was once a small gold mining town, its history continues to grow ever year.

The history has now come to life at the Borough Club with a new wall that showcases photos of Eaglehawk dating back to late in the 19th century.

“Eaglehawk is renowned for galvanising together to achieve a stronger community, and the wall located in the Borough Club dedicated to the history of Eaglehawk, resembles the connections this community has always had,” Bendigo Stadium Limited chief executive officer Nathan O’Neill said.

The wall includes photos of ‘James Picken Watch and Clock Maker’ in 1873, Magazine Hotel which opened in 1871, the Eaglehawk Newsagency photo taken in 1925 which still operates today, and the original Lake Neangar Rowing Club from 1883.

“All of the photos used for the wall are a mixture of some of our members’ photos and the Heritage Society’s collection,” Mrs Kirkwood said.

“The collection of photos is incredibly important as they are a way to appreciate Eaglehawk’s history.

“People will now be able to walk into the Borough Club and relate to all of the photos. It’s a way to cherish Eaglehawk’s enormous growth to what it is today.”

One undeniable aspect of the Borough’s history is sport.

“We have such strong clubs, whether it’s football, netball, hockey, bowling, soccer, swimming, cricket or athletics, we all work together and are a united front,” Mr Reid said.

On the wall are pictures of the iconic Canterbury Park Grandstand in addition to historic photos of football teams from the early 20th century.

“The grandstand is a huge part of our community and something that will never be replaced. It really does take pride of place.”

Mr O’Neill said sport was an integral part of Eaglehawk and was essential to the Borough Club.

“Supporting the community sporting groups is important to us to ensure there is investment into local sporting pathways,” he said.

“The Borough Club proudly sponsors the cricket, football, netball, hockey, and bowls clubs from Eaglehawk. We enjoy following the success the clubs have in their respective leagues,” Mr O’Neill said.

Empowering Eaglehawk treasurer Mary Preston said the wall was another great addition to the Borough’s history.

“There’s always been something special about Eaglehawk, it has its own unique identity,” Mrs Preston said.

“And that’s the wonderful thing about the new wall here at the Borough Club, it’s what we stand for, empowering and supporting the people of Eaglehawk.”

“The array of incredible photos are just another way to highlight the history.”

The mammoth task of converting the 50 plus photos was undertaken by a Bendigo business.

Bart N Print owner Steve Bright said he was thrilled with the end result of the project.

“It was a process that our head designer proudly took on board. He had to come out several times to take measurements to make sure it all matched up perfectly,” Mr Bright said.

The entire process from scanning the first photo through to completion took around two weeks.

“Some of the photos were a little bit scratchy and others were slightly out of focus, so the challenge was making them all look the same,” Mr Bright said.

“Back in those days they didn’t quite have the same level of digital technology as we have today, the photos would have been taken using an old square box camera with a hole in the back of it.

“But above all the Borough Club and everyone that’s been involved is happy with how it has all turned out which is the most important thing.”

Mr O’Neill said the team at the Borough Club were excited to showcase the wall of history to the whole community.

The Borough club, which sits in the heart of Eaglehawk on High Street overlooks Canterbury Park and will no doubt continue to be a part of the community’s history for many years to come.